How Popular Is Ice Hockey in the US Compared to Other Sports?

It is no secret that the sport the US citizens are most proud of is baseball. However, ice hockey, or simply hockey, is nothing to sneeze at either. It is the same as closely following things like the SportPesa Registration, there are also other deals that are equally enticing. So, how does hockey in the US fare against other sports and which is the most popular?

Ice Hockey and the NHL

Hockey began in the US at the end of the 19th century. The way the game was played in its beginnings is the players would hit a ball across the surface of frozen lakes. Though the game ultimately belonged to the Canucks from the north, the Americans quickly adopted this new sport and made it their own. The first ice rink in the US was built in Maryland in 1894. It wasn’t until November 26th, 1917, that the country founded the National Hockey League, or the NHL.

That’s enough for history, let’s see how the sport has developed in modern times. Since 2015, there are over 2000 rinks in the country, with the NHL having 31 teams participate in it – 24 from the US and 7 from Canada. To measure its popularity is difficult, but we can compare the number of people that watched major events. For example, one of the matches of the Stanley Cup was closely followed by 2.9 million people in the US. Suffice it to say that it is not as popular as some other sports in the US, which can be understood, as hockey, in its nature, is a niche sport. Despite the aforementioned 2000 rinks, the number of places one can practice is nowhere near the number of basketball courts or football fields. 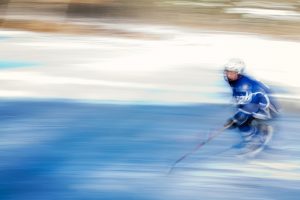 In 2019, the finals of the NBA were watched by 15.14 million people, which is still low compared to the record of slightly over 20 million in 2017. There are even some that argue that the popularity of basketball is rising and would one day surpass the love the Americans feel for football. One of the reasons for this is the universal love for basketball that can be felt around the world. Basketball is also a lot more flexible than other sports, needing far less equipment than most of them. Think about it, to play basketball, all you need is a ball and a hoop.

Football is still among the most popular sports in the US. In 2019, as many as 15.4 million people followed the games closely. Why is football so popular? Well, one could say that it is the only sport that is truly American. While there are Canadian teams that partake in the sport, the NFL doesn’t include them. So, unlike the NHL, they don’t need other teams in order to make the game more exciting.

Major League Baseball is the favorite sport to watch in the United States. Lauded as America’s favorite pastime, baseball has found its way into other countries, particularly Japan, over how great of a sport it truly is. 68, 49 million people followed the MLB games in 2019. It would appear we have a winner especially when you compare it to 5 million people watching the NHL.